My mom put me on a horse before I could walk, and I began eventing by age 8. I grew up riding at Hitching Post Farm in South Royalton and first started eventing on my Welsh pony cross. At Hitching Post Farm, I spent after school hours and weekends riding as many horses as possible, doing chores and learning all that I could. I competed through the CCI* level while at HPF, completing the 2004 NAYRC CCI* championships. 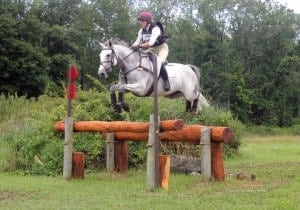 In high school, I became a working student for Sue Berrill (Greylock Farm, Windsor, VT). She helped me compete my homebred Connemara gelding, Practically Perfect, through the intermediate level. At this time, I was also able to train with Denny Emerson.

While in college at the University of Vermont, I started LBF Oleagh’s Image (“Leah”, a 2005 ISH mare that my mother purchased as a weanling) under saddle and began her competition career in 2010. She quickly displayed her bravery, scope and potential for the highest levels of eventing.

After graduating from college, I decided to commit to bringing Leah along to the upper levels and pursue training and competing horses full-time. I relocated to Southern Pines (in Jan. 2012) to work for a friend from Vermont. That winter, I began riding horses for Annie Eldridge (Setters’ Run Farm, Duxbury MA & Southern Pines, NC). I started competing just one horse for her and the string of horses has grown over the last few years, ranging from 5 year olds eventing at training level to two-star horses, preparing to move up to Advanced. Annie also breeds her own horses, with the goal of producing upper-level prospects. Our plan is to continue to compete the current group of horses, while bringing along her homebreds.

I enjoy training young horses and building a confident partnership and solid foundation that will enable them to succeed at the upper-levels. Leah has competed through the CCI** level and was named to the 2014 USEF Eventing 25/Developing Riders list. My goals are to bring Leah to the CCI4* level and to compete internationally for the United States.

We would like to introduce you to a very important member of the Emerald Valley Natural Health family, Dr. Tom Shurlock.
Dr. Tom, as he likes to be called, started working for British Horse Feeds in 1997. Armed with a BSc in Agricultural Biochemistry & Nutrition and also a PhD in Animal Physiology & Nutrition, it was very clear from the get go researching new developments in horse nutrition (and natural horse supplements) are Tom’s passion.
Read More!

Disclaimer: This information is presented for informational purposes only and is not intended as an endorsement of product. Emerald Valley is not intended to be a substitute for your appointments for veterinary care, either for regular annual exams, dental checkups or necessary treatments when your animal has health problems.

Instead, Emerald Valley offers the animal owner information about animal health care and natural, top quality products that can have dramatic results without the use of drugs, chemicals, harsh pesticides or low-grade ingredients.